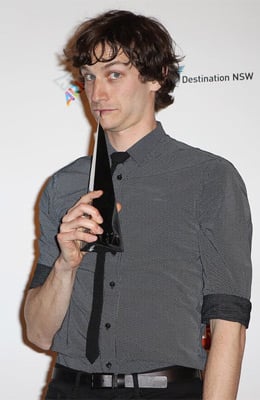 2011 was a huge year for Gotye, and it looks like his 2012 has already gotten off to a great start! Yesterday Triple J revealed their annual Hottest 100 songs as voted by listeners, and Gotye (real name Wally De Backer) scored the number one spot with his hit “Somebody That I Used to Know,” featuring Kimbra.

The top 10 was dominated by Aussie acts — while US group The Black Keys came in second with “Lonely Boy,” Matt Corby’s “Brother” was in third place, and bands such as Boy & Bear, San Cisco and Hilltop Hoods also made it into the top 10. Gotye’s collaborator Kimbra had an additional three songs from her album Vows in the Hottest 100.

Head to Triple J’s site for the whole list, but for now, tell me if you think “Somebody That I Used to Know” is deserving of the top spot!

Music
This Rose Crystal Ball Music Box Is Straight Out of Beauty and the Beast, and We're Enchanted
by Haley Tharp 3 days ago

Music
Hear a Sneak Peek of the Badass, Female-Centric Birds of Prey Soundtrack
by Victoria Messina 1 week ago

Music
With Demi Lovato Performing the National Anthem, Super Bowl 2020 Will Be Star-Studded
by Kelsey Garcia 1 week ago
Latest Celebrity
×