Adapting F. Scott Fitzgerald's 1920s-set novel The Great Gatsby is an ideal fit for director Baz Luhrmann. The man known for over-the-top visuals in films like Moulin Rouge! and Romeo + Juliet depicts the biggest parties you've ever seen in Jazz Age-era New York, and Luhrmann even presents it all in stunning 3D. The aesthetic is the best thing about The Great Gatsby, which falls short in many other aspects. The movie is bloated with every detail and character from the book, and Fitzgerald's text is awkwardly featured on the screen. Luhrmann is as ambitious as Gatsby's climb toward the American dream, and only some of it pays off. 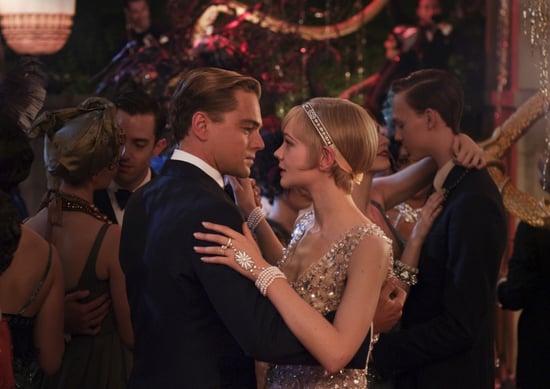 There are a few saving graces, like Leonardo DiCaprio. The actor puts on the impeccable suits of Jay Gatsby, a man whose background and source of wealth are a mystery. The ridiculously rich Gatsby is king of a Long Island castle where he can buy anything — except for the love of his former sweetheart Daisy Buchanan (Carey Mulligan). She's quite comfortable with the old money she married into, even though her husband, Tom (Joel Edgerton), is a cheating bigot. It's the task of Gatsby's neighbour, narrator Nick Carraway (Tobey Maguire), to help Gatsby win Daisy back, and though the two lovers do find their way back to each other, Gatsby's pretty, pretty world crumbles as he tries to make a life with her. The movie follows a similar path, starting off strong — all debauchery, confetti and champagne — until it fades into a drawn-out bore. Luhrmann still succeeds in some areas, though; to find out what else I thought of The Great Gatsby, just keep reading.

DiCaprio is a perfect Gatsby — he's got the mystique down, and he looks flawless in the part of an affluent gentleman. It's not just looks, though; Gatsby's insecurity is palpable, and DiCaprio conveys that vulnerability with quiet agony (and sometimes a bit of humour). But as great as he is, Maguire's performance is not quite up to snuff. He has the requisite wide-eyed look as Nick, the outsider invited in, and he could be interesting, but Maguire plays him as a bland everyman. It's one of the movie's bigger failings, because Gatsby is the title character, not the main one. It's Nick's story to tell, and Maguire doesn't rise to the occasion.

Adding anachronistic music is one of Luhrmann's trademarks, and he takes lots of liberties with The Great Gatsby's soundtrack, mixing modern pop, hip-hop and indie rock with jazz and big band. Most of the time the Jay-Z-selected tracks fit seamlessly, and sometimes they really don't. Fergie's swing-infused dance song during a big bash? Yes. A car full of people grooving to Jay-Z's "Izzo (H.O.V.A.)"? No.

Even though Luhrmann is a director known for taking big risks, he's pretty loyal to Fitzgerald's writing and doesn't put any big spin on the story or characters. However, those areas could have used some tinkering. With so much detail, the movie is far too long and becomes tedious, and the characters are as unsympathetic as they are on the page. You feel nothing as hearts break and people die, which works in a book as a morality lesson, but in a movie? It just makes you disengaged.

And yet, there's still a reason to go to the party. Newcomer Elizabeth Debicki is a perfect Jordan, the picture of flapper sophistication, Isla Fisher is a scene-stealer as Tom's working-class mistress Myrtle, and Carey Mulligan breezes around in diaphanous dresses exactly the way you'd imagine a privileged wife of the 1920s. They help immerse you in their bygone world, as does the sheer spectacle that Luhrmann creates. The Great Gatsby is often fun — just don't expect to have the time of your life.