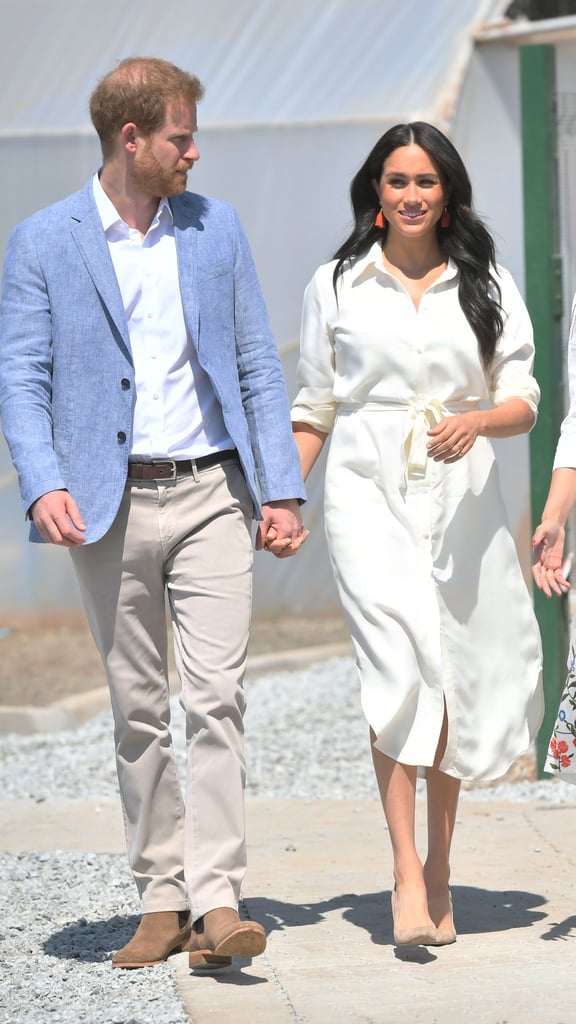 Say it ain't so — Meghan Markle and Prince Harry's royal tour is nearing its end. The Duke and Duchess of Sussex kicked off their 10-day visit to Southern Africa on Sept. 23 and have been keeping busy with official appearances. The couple's 4-month-old son, Archie Mountbatten-Windsor, is on the trip with his parents, but Harry and Meghan stepped out without him as they made their first appearance, visiting a workshop that teaches children about their rights, self-awareness, and safety. Meghan delivered an empowering speech about women's rights, and the couple even took part in a mini dance party! The Duchess of Sussex stunned, as per usual, in a black and white printed wrap dress, while Harry kept things casual in a button-down and black pants. Shortly after, the couple made a quick outfit change as they visited the District 6 Museum and Homecoming Centre.

On Tuesday, they began their day in casual style as they visited the Waves for Change compound kitchen and hung out with a group of young surfers. Shortly after, they visited the Auwal Mosque before attending a reception at the residence of the British High Commissioner, where they shared several cute moments with kids.

Wednesday was a big day for the family as Archie made his first official appearance of the tour. Meghan and Harry took Archie to meet with the city's former Archbishop Desmond Tutu, and needless to say, the meeting was adorable. The couple then went separate ways as Meghan visited with the nonprofit organization mothers2mothers in Cape Town.

On Thursday, Harry stepped out for a solo appearance in Botswana as he helped local schoolchildren plant trees at the Chobe Tree Reserve. He also opened up about why Africa is so important to him, telling reporters it helped him heal after Princess Diana's death. "I came here in 1997, 1998 straight after my mom died, so it was a nice place to get away from it all," Harry explained. "But now I feel deeply connected to this place and to Africa." He also added that being on the continent gave him a "sense of escapism . . . a real sense of purpose." Meanwhile, Meghan met with female leaders, including antiapartheid activist Sophia Williams-De Bruyn, to discuss women's rights in South Africa.

Friday was presumably an emotional day for Harry, as he followed in his mom's footsteps and visited a minefield in Angola with the Halo Trust. The charity helps countries recover after conflict, with a focus on clearing landmines to save lives, and Diana famously visited the same minefield in 1997. He then spent some time with kids during an adorable visit to the newly renamed Princess Diana Orthopaedic Centre in Huambo.

Harry then met the president of Angola, João Lourenço, as well as First Lady Ana Dias Lourenco on Saturday. The duke shook hands with the country's leader before posing for photos and sitting down for a chat. That same day, Meghan posted about her private visit to the memorial site of Uyinene Mrwetyana, a 19-year-old University of Cape Town student who was raped and murdered, allegedly by a post office worker in late August. The duchess left a handwritten note and tied a ribbon at the site to "pay her respects and to show solidarity with those who have taken a stand against gender based violence and femicide."

On Sunday, Harry continued his solo outings in Malawi where he met with women attending the Nalikule College of Education through the support of the nonprofit Campaign For Female Education. Although Meghan wasn't physically there, she made a surprise appearance through Skype and also got to speak with the women. After the college visit, Harry met with Professor Arthur Peter Mutharika and attended a reception at the British High Commissioner's Residence.

The following day, Meghan made a stop at the Victoria Yards in Johannesburg, where she was greeted with bear hugs by a group of kids. She also met with children and founders of the Timbuktu in The Valley program, which is devoted to equipping kids with skills that allow them to be independent. Meanwhile, Harry visited the memorial site for British solider Mathew Talbot, who was killed by an elephant while on anti-poaching patrol, at the Liwonde National Park.

On Tuesday, the couple once again stepped out solo. Meghan looked excited as she arrived to meet students and staff at the University of Johannesburg, then made a quick wardrobe change before a trip to Action Aid, where she was spotted cuddling some very excited young fans. Harry, meanwhile, was in Botswana, visiting the Mauwa Health Centre. The couple finally reunited on Wednesday for the final day of the tour, kicking off with a visit to the township of Tembisa.

On the final day of their tour, Meghan and Harry reunited in Johannesburg as they visited the Tembisa Township before attending an afternoon reception at the British High Commissioner's residence. Though they didn't bring baby Archie out with them, they were all smiles as they walked hand in hand. The appearance comes a day after Harry announced that he was taking legal actionagainst the "ruthless" treatment his wife has suffered from the British press.

The goal of this tour is to bring awareness to causes that are important to Harry and Meghan, as well as Harry's late mother, Princess Diana. The trip will extend until Oct. 2, however, Archie has only been present on certain "safer parts of the trip" and has remained with his nanny most of the time.

In 2018, the Duke of Sussex made a handful of significant trips to Africa on behalf of his Sentebale charity and to raise awareness on the importance of education for young girls. He and Meghan also embarked on a tour of Morocco, where they learned about the country's efforts to further education equality. Clearly, the Sussexes are determined to make a positive impact in the world. See all the photos from their royal tour ahead, then get the details on all of Meghan's tour outfits and track the comfortable flats she's been wearing!

The Royals
From Royal Baby to Big Girl: 23 Adorable Photos of Sweden's Princess Estelle
by Murphy Moroney 4 weeks ago

Celebrity Beauty
A Royal Affair: The Lipsticks You Need to Recreate Meghan Markle's Natural Look
by Balim Tezel 4 weeks ago