I think I just became Taylor Swift's dad's number one fan. In a recent interview with Variety, Swift — who stars as Bombalurina in the live-action adaptation of Andrew Lloyd Webber's Broadway musical Cats — revealed that her dad inspired the psychedelic catnip scene in the film (and this might just be my favourite detail about the whole movie). While lounging in a hammock, Bombalurina sprinkles glittery catnip over the Jellicle Ball, a scene that wouldn't have made it into the movie if it weren't for Scott Kingsley Swift.

"My dad walks around going, 'Hey, I'm the reason there's catnip in the scene.'"

"My dad is the most social, friendly man in the world," Swift said. "He has lots of ideas. When I was a kid, I'd have these meetings and I needed a parental chaperone. My dad would always, in the middle of the meeting, have an idea he'd want to tell people about. I'd be like: 'Dad, Dad stop!'"

During a meeting with Cats director Tom Hooper and the rest of the film team, Swift experienced that exact same feeling all over again. "In the middle of this meeting, Dad just pipes up and says, 'Hey, I got an idea. What if you had a scene where they are all at the Jellicle Ball and they all get catnipped so they all just start going crazy?'" Swift said. The cat-loving singer-songwriter and her dad went on to explain to Hooper the reaction cats have to the herb, and the director was instantly on board. 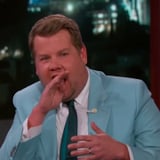 James Corden Likened Filming Cats to Being on Hallucinogens: "Is This Real Life?"

"That's going to be in the movie," Hooper told Swift's dad, who was proud of his suggestion. "My dad walks around going, 'Hey, I'm the reason there's catnip in the scene,'" Swift added. "For the first time, one of his mid-meeting bursts of inspiration has really turned into something. It's a really good moment for my dad."

Music
Exclusive: The Zombies 2 Cast Takes You Behind the Scenes of Those Memorable Performances
by Kelsie Gibson 2 days ago

Movies
Exclusive: KJ Apa and Britt Robertson Are the Epitome of Young Love in I Still Believe Clip
by Kelsie Gibson 2 days ago

Celebrity Interviews
Justin Bieber Tearfully Talks About Supporting Billie Eilish: "She Can Count on Me"
by Brea Cubit 3 days ago
Latest Celebrity
×