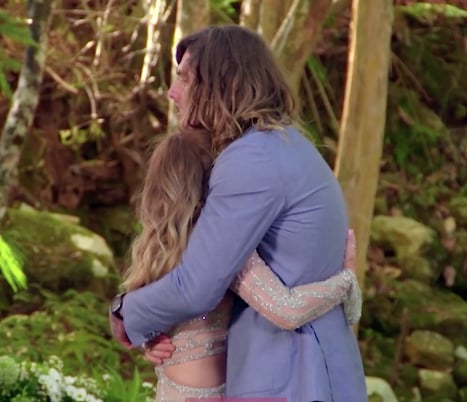 Seeing the runner-up of The Bachelorette be turned down is always one of the saddest TV moments of the year. But, as difficult as it still was, we don't think we have ever seen someone take the rejection as well as Timm Hanly just did.

Yep, if anything he was comforting Angie, and we are so here for it.

The heartbreaking yet beautiful moment all begun when Angie told Timm she viewed him as her "soul mate". Despite this declaration, it soon became clear that this wasn't enough to have captured her heart.

"I love so much about you, a piece of me is like, I can't picture my life without you, I really can't," she said.

Before she could finish getting her words out, Angie burst into tears. So overcome by the enormity of the decision, she couldn't actually finish her sentence. But, she did not need to, as Timm did all the talking for her.

"We have had the best time ever, this is the situation we're in and i'm so happy I met you. . . I love Carlin, if I could pick anyone to treat you the way you deserve to him treated it's him, please don't be sad," he said.

As if his reaction wasn't as straight up angelic already, he chose to still give her the promise ring he had prepared in case he was the winner. Describing it as a "little piece of [him]", he assured Angie he would still be in her life even though they weren't meant to be as romantic partners.

He took the entire thing so well, that Angie even asked him why he didn't seem sad.

" I'm gutted, I just don't want to see you cry," he said, and our hearts may or may not have melted in that moment.

"You're such a gem of a person and you do deserve the world," he said.

"Thank you for being so understanding, I'll miss you," she concluded.

Now, if that reaction doesn't deserve a medal, then we don't know what would.

Check out the memorable moment below.

Related:
Angie Kent Has Chosen Her Man and the Internet Has a Lot of Feelings About It