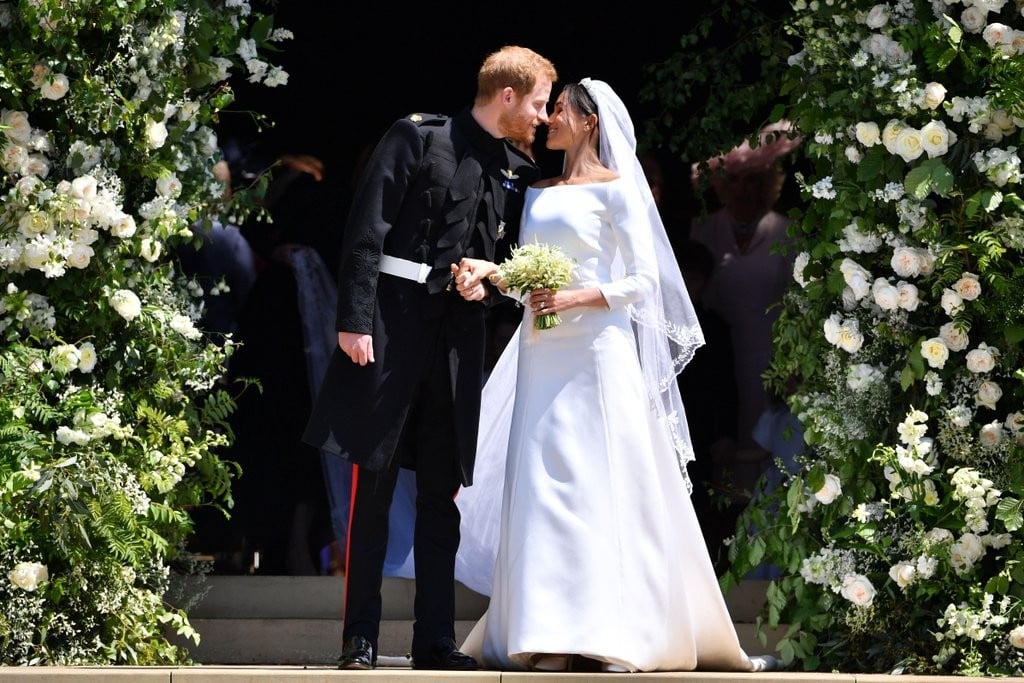 Update May 19, 2018: Meghan chose to work with British designer Clare Waight Keller on her stunning Givenchy wedding dress. The look was elegant and all in the details of the accessories, which included satin shoes, Cartier jewels, and a lovely veil stitched with an entire story. She completed the look with Queen Mary's diamond tiara. While Givenchy might've been a surprise, Meghan did choose Stella McCartney for her evening party dress, which you can see here.

Update May 18, 2018: With just a couple of hours to go before Meghan's big day, Page Six has reported that allegedly the princess-to-be has chosen Stella McCartney to design her wedding dress. While this hasn't been confirmed, we can picture Meghan wearing the British designer as a tribute to her new home.

Update May 18, 2018: When Princess Diana's wedding dress designer David Emanuel was spotted at Windsor Castle ahead of the royal nuptials, speculation began that he might have had a hand in designing Meghan's gown. But we doubt that's the case — especially when he's giving interviews about which designers are in the running and touching on what he hopes to see her in. (Emanuel seems to feel strongly about Burberry's Christopher Bailey or Ralph & Russo.) Nevertheless, it's a bit heartwarming to learn about this style connection right before Meghan walks down the aisle.

Update May 17, 2018: The top contenders for Meghan's wedding dress include Sarah Burton (who famously designed Kate Middleton's gown), Erdem, and Ralph & Russo (who designed Meghan's dress for her official engagement portraits). There have also been many searches connecting Carolina Herrera and Christopher Bailey with Meghan's wedding dress, according to a Google trend report. If Christopher Bailey is the chosen designer, it could mark his final offering at Burberry before he steps down from the British fashion house. Meghan's mom, Doria Ragland, was spotted with a Burberry garment bag right before the wedding, so the connection here is obvious.Update May 5, 2018: Prince Harry was reportedly seen leaving Ralph & Russo in Chelsea, leaving people to wonder if he was indeed making arrangements for Meghan's first wedding gown, which, apparently, will be "heavily beaded" and cost more than $135,000. If you recall, Meghan wore Ralph & Russo for her royal engagement portraits. The sheer, embellished design was rumoured to have been worth $75,000.

Update May 4, 2018: If you were wondering if Meghan Markle got emotional when she found her wedding dress, the answer is a resounding yes. Meghan's gal pal Priyanka Chopra stopped by Bravo's Watch What Happens Live With Andy Cohen, and Priyanka was asked if the soon-to-be royal shed any tears when she found her dream dress. While the star didn't flat-out say yes, she did smile before burying her face in her hands, which to Cohen, and fellow guest Sebastian Stan, seemed like a "yes!"

Update Apr. 13, 2018: Victoria Beckham visited The Late Late Show With James Corden, where she was celebrating her upcoming Reebok merch featuring Shaq, and she was asked if she'd be attending the royal wedding and whether she'll be designing the dress. "I'm not doing the dress . . . sadly not, but I'm sure she will look incredible in whatever she wears," Victoria said. While Meghan has worn Victoria's label before, it looks like she will stick to RTW for now.

Update Apr. 4, 2018: We may have another reason to believe that Meghan Markle has chosen Erdem as the designer of her wedding dress. People has reported that the fashion house run by British-based, Canadian-born designer Erdem Moralioglu, has taken its public relations operation in-house rather than using an agency. This has led many to wonder if this was done to protect Meghan's privacy and prevent any leaks about her dress. There's also a sweet connection if Meghan chooses the brand because this would be a tribute to her new home in the United Kingdom and a nod Canada, which is where she filmed Suits.

Update Feb. 21, 2018: People have been speculating about Meghan Markle's wedding dress designer, and fashion houses such as Erdem, Ralph & Russo, Roland Mouret, and the queen's dressmaker Stewart Parvin are all on the table. But recently, it's been reported that a spike in votes on Alexander McQueen has caused bookies to suspend betting on this very special event.

Sarah Burton designed Kate Middleton's Alexander McQueen gown for her nuptials in 2011, and Meghan recently wore a tailored black suit from the fashion house — so there is a connection there. But a spokesperson told Daily Mail that "We've now suspended this market after seeing some interesting betting [on Tuesday, Feb. 21] on Alexander McQueen, who went from 16/1 to 8/1 in a very short space of time." This has led some folks to suspect a "leak" in the news.

Original post: Meghan Markle's received plenty of sketches from designers (including Inbal Dror) who have imagined her future wedding dress, and she's reportedly had one fitting at Kensington Palace. This did not go down without her trusty stylist and friend Jessica Mulroney, who flew in from Toronto to advise her on her bridal look. This all comes from royal reporter Omid Scobie, who confirmed the news to ABC and posted a tweet on his account:

"They've tried on a number of different designs and are currently whittling it down to pick the best design for the day . . . During the process, Meghan expressed the desire to wear something simple and classy and very elegant," Scobie told ABC.

There are now strong rumours that Roland Mouret is the chosen bridal dress designer. Though all he said on the topic to Women's Wear Daily was, "Mmmmm, I don't want to say. No comment. It's . . . there is no comment on that. She's a friend. And that's . . . I can't say." (Sounds kind of like a yes to us?)

It was further revealed that Mulroney is assisting the royal couple with planning many different aspects of the ceremony, which will take place on May 19. While we wait for more information, read on to see Meghan and Jessica together at an event in 2016, then check out Meghan's first wedding dress and dream a whimsical dream as you imagine her walking down the aisle.

Celebrity Style
Mindy Kaling Is Having a Lot of Fun With Her WFH Outfits, and We Wouldn't Except Anything Less
by Nikita Ramsinghani 3 days ago