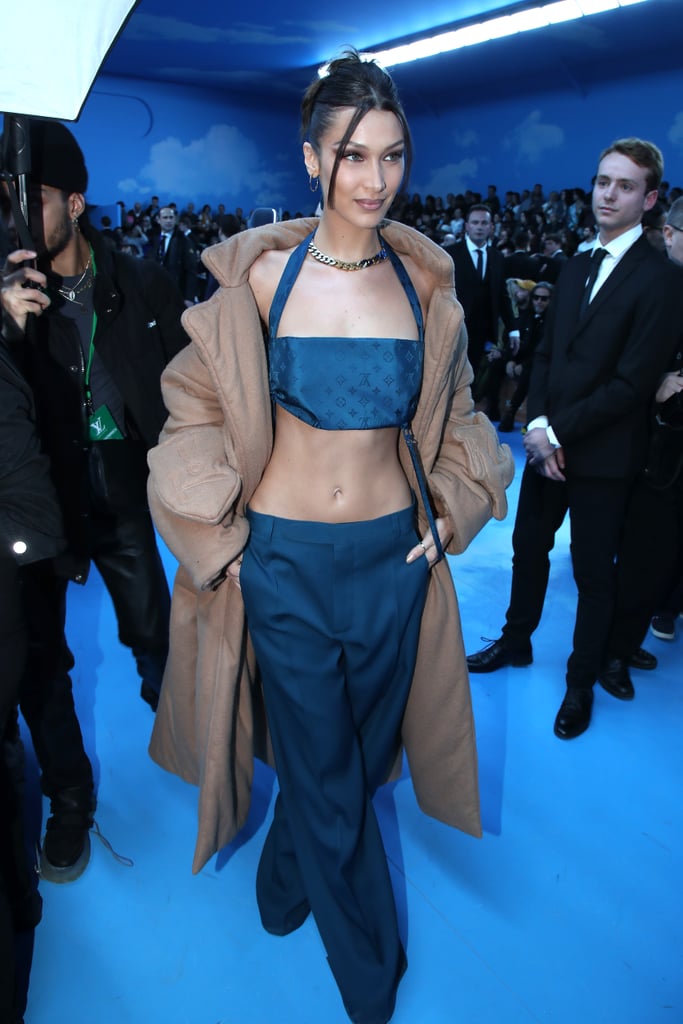 When you're Bella Hadid, crop tops are a year-round fashion staple. On Thursday, the 23-year-old supermodel attended the Louis Vuitton Menswear show during Paris Fashion Week, and if you told me these photos were taken in the early 2000s I wouldn't question it. Bella rocked a silky halter crop top with slouchy, low-rise slacks that had very similar vibes to that of a certain couple's outfits at the 2001 American Music Awards. Yep, I'm talking about Britney Spears and Justin Timberlake's matching denim looks. Bella herself was born in 1996, and she reminded everyone that she's totally a '90s baby by pairing this look with a chic updo hairstyle and chunky gold jewellery.

Bella's style has been absolutely on point lately, and as Fashion Month approaches, we know she's only going to wow us even more. Earlier this week, she pulled out all the stops in a supersexy Burberry sheer silver bodysuit. And her all-leather Tommy x Zendaya look that screamed Catwoman had us bowing down. Check out photos of Bella at the Louis Vuitton Menswear show during Paris Fashion Week ahead, and see her effortlessly pulling off the low-slung jeans trend here.

Celebrity Style
Annie Murphy Kept the "A Little Bit Alexis" Dress From Schitt's Creek, and I Love That For Her
by Karenna Meredith 23 hours ago