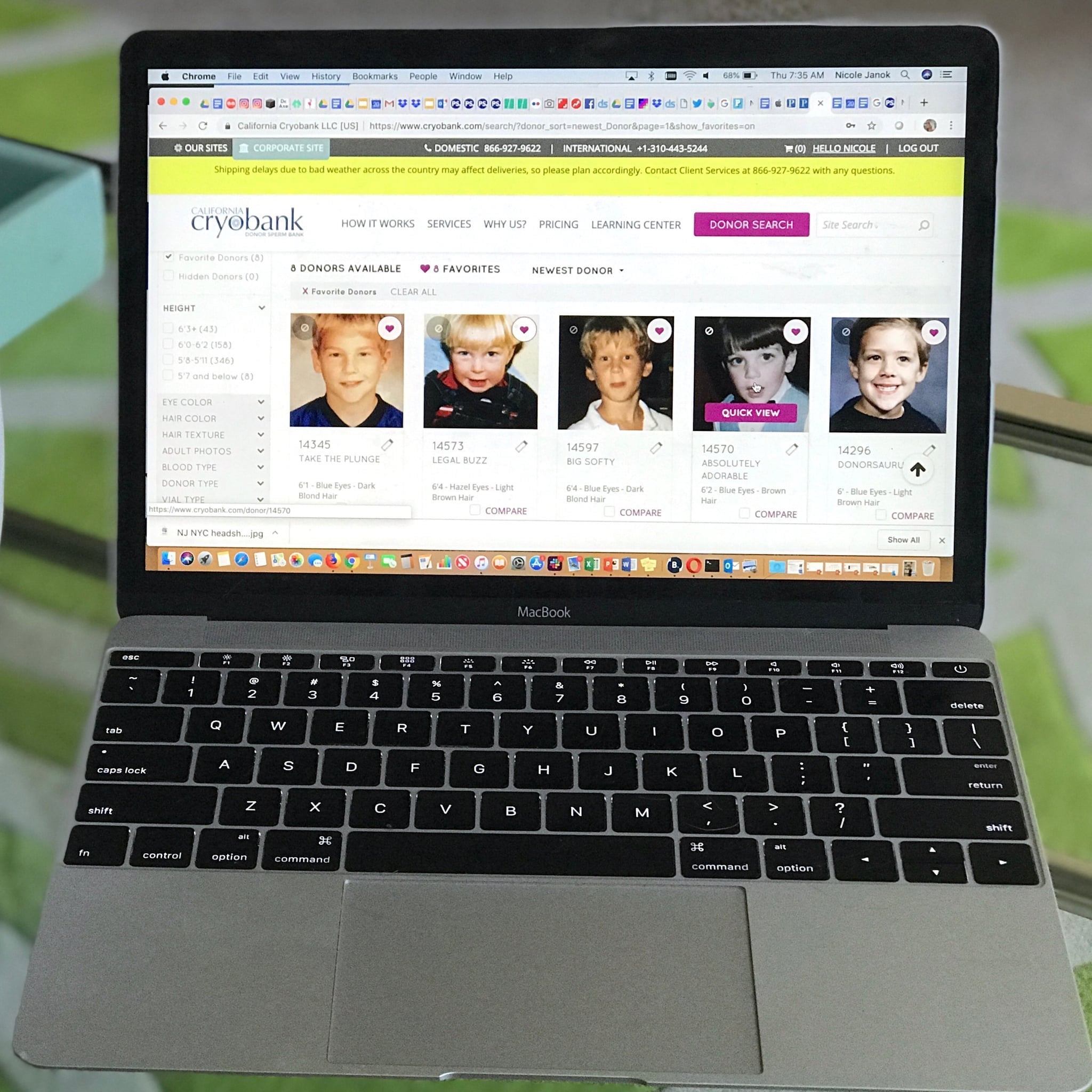 A few weeks after my 35th birthday, I headed for my annual lady-doc appointment and asked about my fertility. I was still single but knew I was destined to be a mother and wanted to know my options since I was AMA (advanced maternal age), which is a nice acronym for . . . girl, you old. I requested a blood test to determine where I was on the fertility spectrum and quickly learned I was about to fall off the proverbial cliff. My ob-gyn immediately referred me to a fertility specialist, and I learned I needed to consider freezing my eggs or IVF as soon as possible.

This was not my life plan. I was living in a new city with no family nearby and working a demanding 60-plus-hour-a-week job. Having a baby solo seemed unrealistic, at best. But there I was, trying to wrap my head around the situation – and find the man whom I would never meet but could eventually give me the greatest gift ever.

At the recommendation of my doctor, I signed up with one of the leading donor banks – California Cryobank, as it was well-established with a strong reputation (this is not the time for amateur hour!). After creating my own profile, I scrolled through the photos of all of these adorable little boys, (you do not see pictures of the donors as adults to preserve confidentiality), and I got really excited about the future.

Akin to online dating, you have a sea of options, all makes and models, nicely packaged into digital profiles that show baby photos, a checklist of physical attributes (height, weight, eye color, skin tone, etc.), and an in-depth medical and psychological overview. You can even find out SAT scores and listen to a recording of their voice. It's frankly more information than some people know about their own spouse.

I made a couple of decisions on physical attributes first — I wanted a tall, blond-haired, blue-eyed guy. It was a purely selfish decision — as a blond-haired, blue-eyed gal, I wanted the best chance of the baby resembling me. Also, I was slightly paranoid that if I chose a guy with darker features and the baby didn't look like me, people would assume we weren't related.

Turns out my process was pretty standard. Physical attributes are typically the most important part of the donor profile, as couples going through donor IVF are trying to replicate the husband's looks. Once I was able to narrow down my potential donors by physical features, I then needed to think about their personality, education, and health profiles. Did I want a guy like me – strong-willed, driven, very social, and extremely sassy? It was an overwhelming decision – creating a human via science is A LOT of pressure!

After a little soul-searching, I realized that, yes, there can be too much of a good thing. I needed someone whose personality balanced mine, so I could avoid potentially creating a maniac child. In the real world, I tend to work well with a quieter guy who is strong enough to handle what I affectionately call "The Janok Show." So I applied the same reasoning here. I searched through Myers-Briggs assessments, personality quizzes, and a host of medical information.

After about two weeks of my online "baby dating," I finally landed on my top contender — "Big Softy." He is a 6'4" former football captain who also likes music and rom-coms and was going to grad school when he decided to donate. Turns out Big Softy had a "closed" donation, which means the potential child cannot receive information about him from California Cryobank once he or she turns 18. This was not a priority for me, but it should be taken into consideration as part of the process.

Once I selected my donor, my doctor and I made the decision to hold on creating embyros until I was financially and emotionally ready to tackle being a mom. I did two rounds of egg freezing, netting a total of nine eggs (healthier women usually net at least 15 eggs in one round).

Fast-forward two years later: I relocated to my hometown and have made the decision to move forward. This week, Big Softy and I are creating embryos! When my PGS chromosomal testing is completed in the next month, I'll know how many viable embryos there are available to transfer. It's time to make a baby!

I know there is still stigma around being a sperm donor, and people wonder what would compel someone to donate. Beyond the extra income, I'm really not sure. But I can tell you I'm eternally grateful – as are the millions of families who are in need of a little assistance in this department.

Little Kids
I'm Trying to Raise My Kids Without Gender Stereotypes, but It's an Uphill Battle
by Angela Anagnost-Repke 23 hours ago